Street fashion had a new name in the form of Amitabh Bachchan when ‘Deewar’ released 46 years ago and went on to catapult the Bollywood star into the country’s dashing ‘Angry Young Man’.

Fans wanted to imbibe his style and Bachchan’s look from the poster, complete with an unbuttoned shirt knotted at the waist, became the fashion go-to for young men and teen boys wearing a chip on their shoulder and rage in their eyes.

However, Bachchan has revealed that the style was never intentional, and in fact, was makeshift job when the unit discovered on the first day of shoot that the tailoring of the shift was all wrong.

“those were the days my friend .. and the knotted shirt .. it has a story [sic],” Bachchan revealed in an Instagram post.

Over 46,000 new coronavirus cases in India

“first day of shoot .. shot ready .. camera about to roll .. and the discovery that the shirt has been made too long – beyond the knees .. director could not wait for another shirt or a replaced actor .. so tied it up in a knot and…,” he trailed off. 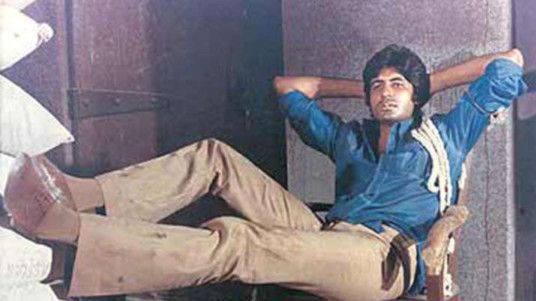 Incidentally, this is not the first time Bachchan has said this. In 2014, he tweeted that his iconic look from the film was a mistake. “The knotted shirt and rope on the shoulder in [Deewaar] was an adjustment for an error in stitching, shirt too long so knotted it.”

The film was directed by the late Yash Chopra, made at a reported budget of Rs50 million, which was huge by Bollywood industry standards at the time. The film also starred the late Shashi Kapoor, Neetu Singh (now Kapoor), the late Parveen Babi and Nirupa Roy.

The Salim Khan and Javed Akhtar written script went on to become a box office success and kicked off Bachchan’s reign in Bollywood. According to Bollywood lore, producer Gulshan Rai initially wanted Rajesh Khanna to play Vijay’s role but Salim-Javed fought to have Bachchan step in and the rest is history as they say.