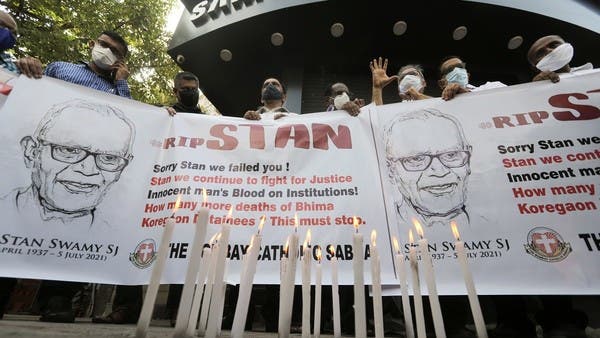 Anger over the death in custody of an 84-year-old Indian priest who had been charged with terrorism offences grew on Wednesday as 10 activists arrested in the same case went on hunger strike.

Stan Swamy, who suffered from Parkinson’s disease and had multiple bail applications rejected, died in hospital on Monday nine months after being arrested under anti-terrorism legislation.

In a statement released through family members, 10 people in prison over the same case blamed his death on “systematic torture” by India’s National Investigation Agency (NIA) and the former head of the jail where Swamy was held.

The 10 are mainly academics and activists.

The priest, who campaigned for marginalized tribal communities, and the others were arrested for allegedly inciting violence between different Indian castes in 2018.

He was accused by authorities of having links to Maoist militants, an allegation he had denied.

Swamy was detained under the Unlawful Activities Prevention Act, which allows people to be held without trial indefinitely and where bail applications are hard.

On Tuesday the office of the UN High Commissioner for Human Rights — which had pressed for Swamy’s release — said it was “deeply saddened and disturbed” by his death.

India’s government responded by saying Swamy’s bail was rejected because of the “specific nature of charges against him.”

“India remains committed to promotion and protection of human rights of all its citizens,” foreign ministry spokesperson Arindam Bagchi said.

“Whether it is the investigations, the arrests, allegations filed under draconian laws, the mistreatment in jail or repeatedly opposing bail, the authorities seemed determined to target peaceful dissent,” she added.

The Times of India said in an editorial that Swamy’s death was an “entirely avoidable tragedy”, slamming the “freewheeling way serious charges like terrorism are being filed.”

On Tuesday, 10 opposition leaders including Sonia Gandhi from the Congress party and three state premiers implored President Ram Nath Kovind to direct the government to take action against those responsible for Swamy’s “inhuman treatment.”

Rate this post
Would George Orwell Blush by The New Man in Iran?