Islamabad: On June 9, a major milestone was reached in Pakistan with over 10 million coronavirus vaccine doses administered. That day reflected both a landmark healthcare achievement and logistical victory, four months after vaccines started to arrive as the pandemic wreaked havoc on every aspect of life.

For many healthcare workers who have been tirelessly working on the frontlines in the battle against COVID-19, the 10 million mark is a “symbol of hope amid the dark days of the pandemic” in a country of 220 million with a fragile healthcare system and 941,170 infections of which 93.2 per cent have recovered, according to the official stats.

Pakistan is slowly and successfully vaccinating its way out of the pandemic. Government officials termed the 10 million mark “a significant step” towards the ambitious goal of vaccinating 70 million eligible people or 33 per cent of the total population by the end of 2021.

In a media briefing, the officials said roughly 125 million adults are eligible to receive the vaccine. An estimated 44 per cent of Pakistanis are under the age of 18. The goal is “to reach the last mile but given how [delivery of] vaccines and epidemics work, if we are able to get to 70 million this year, then we can start to breathe easier,” Dr Faisal Sultan, infectious disease specialist and adviser to the prime minister on health affairs, told Gulf News. He believes the next two months would “require really solid effort to ramp up the vaccine delivery” to get the vaccine to as many Pakistanis as possible.

Pakistan began its COVID-19 vaccine drive on February 3 starting with frontline healthcare workers and touched the 1 million mark by April 6. It took around 60 days to reach the first million and about the same time (2 months) to administer another 9 million doses – indicating a major boost in vaccine rollout. In comparison with neighbouring countries, Pakistan’s immunisation campaign has initially been slow amid hesitancy and shortage of vaccines but the drive picked pace last month as the country started producing the single dose Chinese CanSino vaccine, with the hope of making 3 million doses a month.

Around 250,000 doses a day are being administered currently. Pakistan is vaccinating all adult citizens (18 years and above) free of cost at government health facilities. Some districts are offering at-home vaccination services for senior citizens and the country opened its first drive-thru vaccination clinic last week.

How many and which vaccines are available?

Pakistan initially grappled with the unequal distribution of vaccines “simply because COVAX/GAVI supply essentially dried out” Dr Sultan said. The UN’s COVAX had committed 45 million doses to the country in 2021 but only 1.3m doses have arrived so far. Amnesty International had expressed fears about inequalities in vaccine access saying that the rich countries and firms have “created a dangerous situation” as a few “rich countries are racing ahead”, while the rest of the world has barely moved beyond the starting line.

With the number of cases and fatalities increasing during the third wave, Pakistan explored other options and managed to procure nearly 13 million doses from its closest ally China. After securing enough vaccines, the current challenge that Pakistan is facing is tackling hesitancy and ensuring a stable supply of vaccines. Dr Sultan said: “We are currently focused on ensuring a smooth supply and distribution network” to reach the vulnerable group and those willing to get jabs, before moving on to a national public awareness campaign. 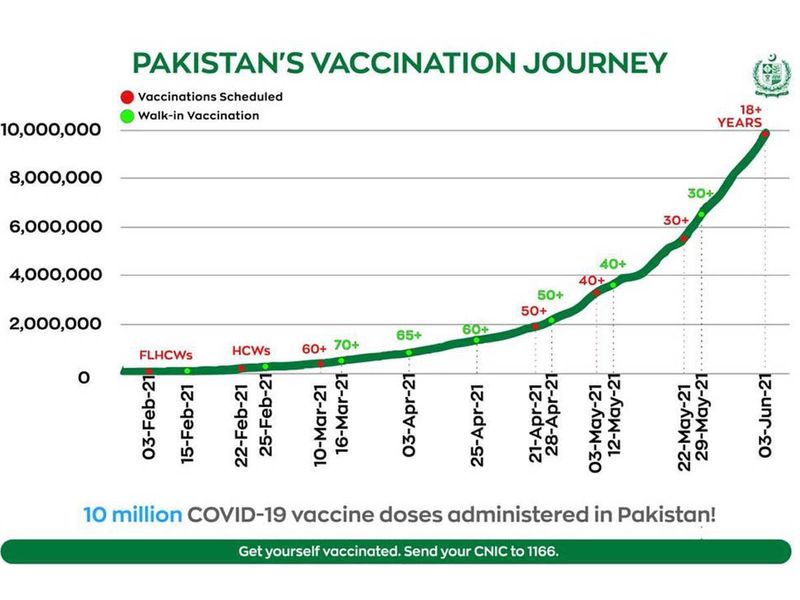 55% willing to get vaccinated

The latest government survey revealed the majority of Pakistanis are ready to get the jabs. “Over 55-60 per cent are willing to get vaccinated which is an encouraging number that can be further enhanced with a targeted awareness campaign,” says National Command and Operation Centre (NCOC) director general operations and planning, Maj Gen Asif Mehmood Goraya. Schools, businesses, mosques and madrassas can play a critical role in supporting vaccination drive and help win the fight against the virus and misinformation spreading on social media, the official said.

Discussing the country’s vaccine strategy, Maj Gen Goraya told Gulf News that NCOC, which is leading the national effort against COVID-19, has devised a three-pronged approach.

· Voluntary vaccinations for all citizens.

The current focus is on voluntary vaccination, as the health officials do not consider punitive measures as the right approach. However, Pakistan has made vaccination mandatory for public and private sector employees in an attempt to reopen the economy following a substantial decline in early June 2021 when daily cases dropped to below 1,400 after a mid-April peak during the third wave when the country was averaging 5,000 cases daily. Pakistan is also planning to introduce several incentives such as travel packages, discount on air, rail and bus tickets, shopping and restaurant vouchers to encourage people to get fully vaccinated.

In the coming weeks, NCOC intends to increase the number of vaccination centres from 1,800 to 4,000 and mobile vaccine teams to 1,000 to boost the daily jab capacity from 400,000 doses currently to one million. Pakistan presently has 172 COVID-19 labs with the capacity of conducting 80,000 tests per day.

How Pakistan rose to its biggest challenge ever?

The close civil-military cooperation played a significant role in combating COVID-19. Soon after the first coronavirus case was detected on February 26, Pakistan’s civil and military institutions together with the health community mobilised every asset to rise to the challenge and formed National Command and Operation Centre (NCOC), chaired by Prime Minister Imran Khan, to lead the national battle against the pandemic.

Collaboration has been key at every step by involving every key sector. Daily morning meetings at NCOC attended by key federal and provincial ministers and health representatives helped chalk out plans to win the fight, utilising the best possible strategy to strike a balance between lives and livelihood.

“Coherent, science-based, centralised decision-making and data-driven approach at NCOC and its effective implementation on the ground” is how Pakistan overcame the challenge, according to officials. Smart lockdowns, Track, Trace and Quarantine (TTQ) strategy, as well as Pakistan’s polio infrastructure, was utilised to track the virus, break chains of transmission and move towards vaccinations to save lives.

“Each week there is more data to demonstrate the impact vaccination has on containing the virus and helping us move out of this pandemic,” Maj Gen Goraya told Gulf News, pointing at the screens monitoring the global rate of infections and vaccination citing the vaccination drives in the US, UK and UAE.