After last year’s Eurovision Song Contest was cancelled amid the global COVID-19 pandemic, it is roaring back to life this year with coronavirus bubbles added to its heady mix of music and melodrama.

National delegations travelling to the Dutch port city of Rotterdam are abiding by strict measures to reduce the risk of infections, while the thousands of fans allowed to attend dress rehearsals, two semi-finals and May 22’s grand final will have to undergo testing to ensure they do not bring the virus into the cavernous venue. 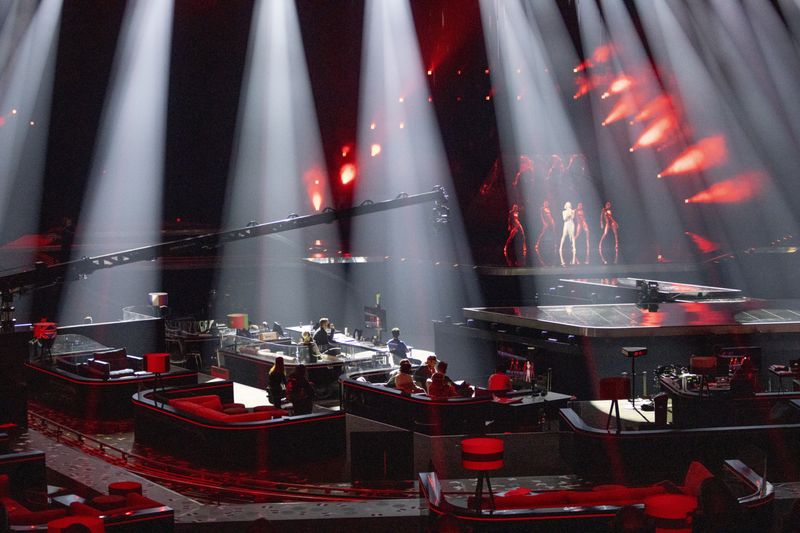 In this photo taken on May 12, 2021, the waiting booths of performing artists are seen in the foreground during rehearsals at the Eurovision Song Contest. Image Credit: AP

Executive producer Sietse Bakker is glad it’s going ahead at all.

“Organising the Eurovision Song Contest is always challenging because you have less than a year to organise one of the biggest and most complex events in Europe, but to do it in a pandemic is much, much more complicated,” he said.

Despite the pandemic measures, the contest that aims to unite Europe in song is continuing its 65-year tradition of upbeat fun.

Fans near the Ahoy arena can get into the swing of the event early. Traffic lights at a pedestrian walkway outside the venue have been transformed so that a green figure dances to Abba’s iconic 1974 winning song “Waterloo” when it’s safe to cross.

Belarus was booted out before the contest even started because organisers the European Broadcasting Union said the country’s original song “puts the non-political nature of the Contest in question.” A replacement song also was rejected.

The theme for this year’s Eurovision Song Contest is “Open up.” It was actually chosen before the pandemic derailed public life around the globe, but is now very apt as Europe begins to tentatively emerge from the coronavirus pandemic. 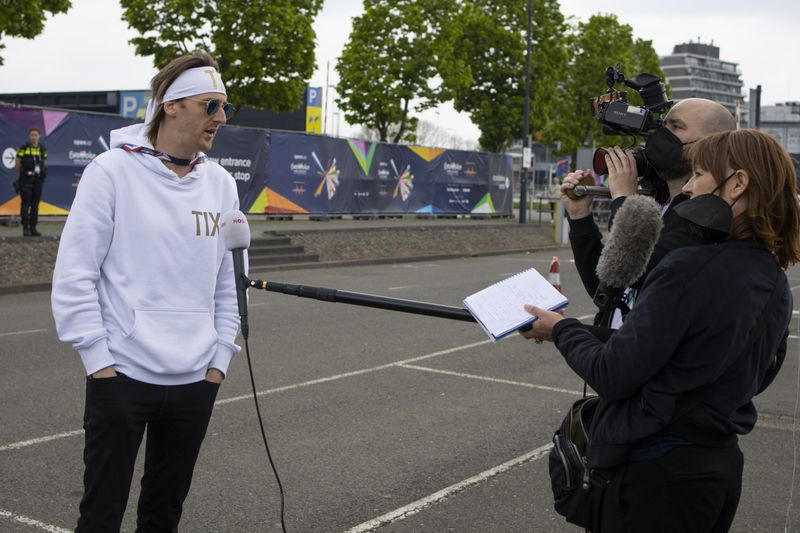 In this photo taken on May 15, 2021 Norway’s Andreas Haukeland, known as TIX, is interviewed by Dutch national broadcaster NOS as he arrives for rehearsals at the Eurovision Song Contest. Image Credit: AP

“We decided to keep the theme because, especially in these times, it’s important that we are open towards each other and that we feel the possibility to open up to one another, to show our true feelings, emotions and thoughts,” Bakker said.

The 2019 Dutch winner, Duncan Laurence, says on the event’s website that he sees music as a way of forging links. “That’s why we need the Eurovision Song Contest. To feel connected again.”

Thousands of fans will be able to make the connection in person.

Each event will be open to 3,500 people — only about 20 per cent of the capacity of the arena — who must show a negative test result that is less than 24 hours old.

Putting Data To Work Is A Business Challenge, Not A Technical One

The top 10 from each semi-final joins France, Germany, Italy, Spain and the United Kingdom — together with host country the Netherlands — in the final. Voting is conducted in each participating country by a panel of music industry experts and viewers.

The pandemic forced the cancellation of last year’s event and this year prevented Australian singer Montaigne from flying to Rotterdam. The Netherlands is hosting the event because the country won the last time the contest was held, in 2019.

Montaigne is still taking part, but by sending in a recorded live performance.

She’s not the only one missing out. The mother of Dutch entrant Jeangu Macrooy also is unable to attend as she can’t travel from her home in Suriname. Swedish singer Tusse’s father wants to know if he can vote for him from his home in Congo.

Ukraine had a scare when the lead singer of its band, Go_A, Kateryna Pavlenko, had to skip a rehearsal in Rotterdam and get tested after feeling unwell. The result was negative and she was welcomed back.

She and her band are among 39 national entrants vying for a coveted victory that can be a springboard to a global career or a fleeting taste of fame.

For many, the stage and global television audience of millions is a chance to express messages of inclusion and positivity.

Russia’s performer, Manizha, sings a song whose lyrics include the lines: “Every Russian Woman. Needs to know. You’re strong enough to bounce against the wall.”

The singer, whose family fled to Russia from Tajikistan, said the message is for women all over the world “because we need to be, we have to be brave. We need to be happier. And I’m happy that I can inspire them on that stage because, you know, Eurovision stage is the one of the hugest stages in the world.” In this photo taken on May 13, 2021, Russia’s performer, Manizha, smiles during an interview after rehearsing. Image Credit: AP 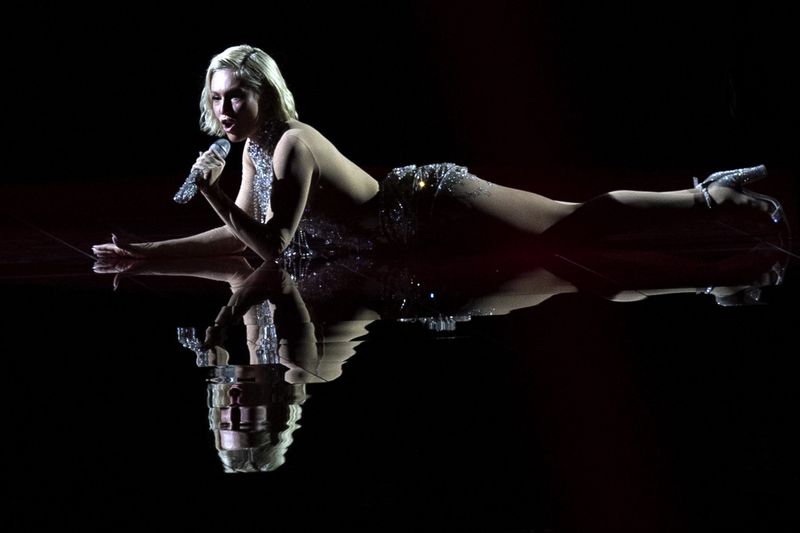 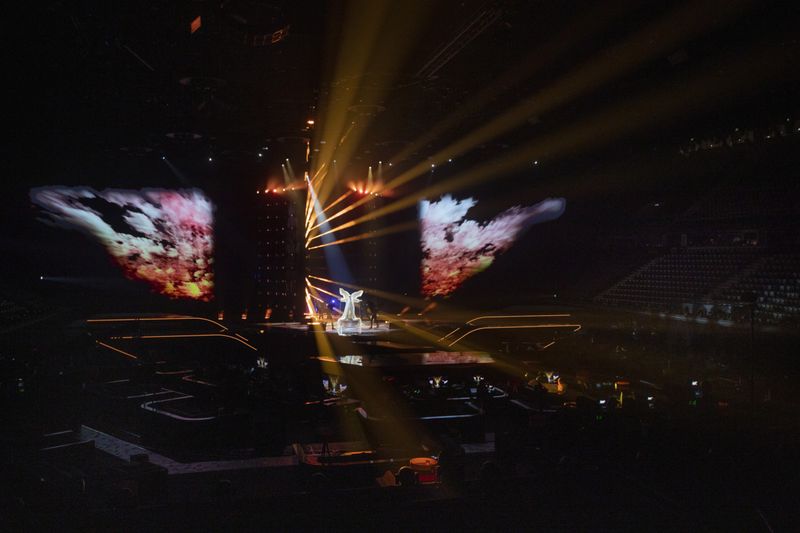 Maltese singer Destiny also has a message of body positivity and is tipped to take it to the final. The 18-year-old’s powerful voice helped her win the Junior Eurovision contest and reach the semi-finals of Britain’s Got Talent in 2017.

Amid the many over-the-top performances, the relatively restrained song “Voila” by French singer Barbara Pravi has emerged as the bookmakers’ favourite.

Cyprus’ performer Elena Tsagrinou has already been in the spotlight after Orthodox Christian faithful on the Mediterranean island protested that it promoted satanic worship.

Tsagrinou says her song, ‘El Diabolo’, which she performs flanked by four dancers in skin-tight red costumes, was misinterpreted and is actually about an abusive relationship between two lovers.

She laughs off the controversy that saw protesters hold up wooden crosses and sing hymns outside of Cyprus’ state broadcaster in March.

Tsagrinou said dealing with the COVID-19 restrictions is tough ahead of the contest, “but that’s not going to keep us back and we’re going to feel the vibe that we want to feel and the smile on our face.”