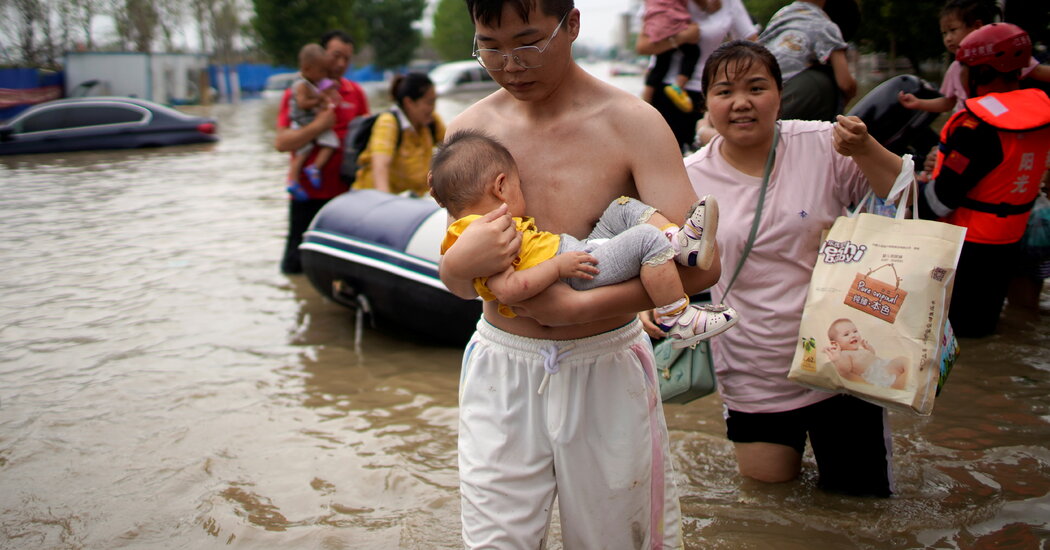 Many homes in Mihe, which is in a flat-bottomed valley with steep slopes of red soil, had been destroyed or badly damaged. Ms. Chen, who survived with her husband and grandchild, had fled to a nearby village.

“Now we have nothing to eat, no water to drink, no home to return to,” she said. “I don’t know what to do.”

Across the countryside, downed power cables snaked across roads, village streets and alleys, the poles supporting them having been washed-out.

In one village near Gongyi, where at least four people were reported to have been killed on Tuesday, Chen Shuailin, 21, said the power had been out since he woke up on Tuesday morning. He worried about charging his phone and preparing food without electricity. “Now it’s cooking by gas,” he said, “and we burn coal.”

In Zhengzhou, subway service remained suspended after flooding that trapped trains in tunnels that filled with water. At least 12 people died in the subway, and hundreds had to be evacuated in harrowing rescues. Near the city’s third ring road, dozens of cars remained piled up at the entrance to a long highway underpass, still submerged. It was not clear whether those inside the vehicles had time to escape, and some appeared to have gone missing.

Two of them were friends, Xu Yukun and Li Haoming, both 14. According to Xu’s sister, Zu Panpan, they had been out with friends when their electric bike had been swept away in the floodwaters at the entrance to the underpass. They called the friends to tell them where they were but they have not answered their phones since.

Their mother, Ms. Zu said in a telephone interview, has been waiting near the underpass as efforts were made to pump out the water. She herself has not slept in two days and was on her way back to Zhengzhou from the southern city of Guangzhou.

Rate this post
2 spinners a must for India in WTC final vs New Zealand: Ian Bishop