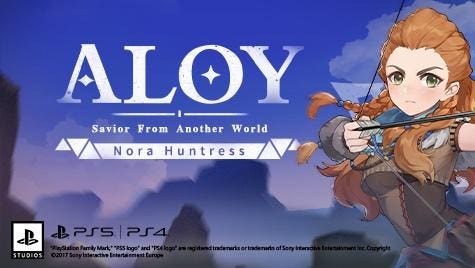 This week in crossovers I’ll admit I never saw coming, miHoYo has just rolled out official art and news that Aloy from Horizon Zero Dawn and the upcoming Horizon Forbidden West is coming to Genshin Impact.

Yes, you heard that correctly. And she’s going to be free. No gacha pulls required.

Genshin has never done any crossovers like this before, occasionally doing things with Honkai Impact, MiHoYo’s other game, but this is next level.

As of right now, there are few details this collaboration, Aloy simply popped up on Genshin’s social feeds like any other character, and early in the day they were rolling out Inazuma heroes we’d already seen.

Aloy’s Genshin bio pretty much just tells the story of Horizon Zero Dawn, and simply says she has come to Tevyat “in search of a new challenge.”

All we know about her is that she’s a 5 star cryo bow user, and yes, this is much different than say, Fortnite getting an Aloy skin (which it has) because they have to design an entire character kit around her. This is more like the equivalent of a new Smash Bros. character.

Genshin Impact has had a partnership with Sony and PlayStation from the start, and recently implemented crossplay between PlayStation and PC/mobile, but I don’t think anyone was expecting a collaboration at this level.

Aloy, it seems, is a 5 star character that is going to be free for anyone who logs in *on PS4 or PS5* after October 13, and will be delivered through the game’s in-game mail system. Aloy will then become free to all players, even PC and mobile, after November 24. So in short, she’s PS exclusive for a month and a half, but is not a part of the gacha system. No word on if she has her own unique weapon or not, as nothing was said about that.

Obviously, this is meant to promote Aloy’s return in Horizon Forbidden West, out this fall on PlayStation 4 and 5, though if Genshin is willing to do a collaboration like this, the door seems pretty open for all manner of cross promotion in the future. I’m thinking 5 star Pyro Kratos for God of War 2…

In any case, this is a pretty wild development, not just because of the collaboration, but also because of the distribution, the first free 5 star character given directly to players since your Traveler, though there’s no telling how strong Aloy will be in-game. To live up to her reputation, I’m hoping she’ll be a powerhouse, but we’ll have to see.

Wild stuff from Genshin here, which is already having a huge week with its new expansion. More to come.

Update: Aloy does have a bow, a 4 star one which is also free: