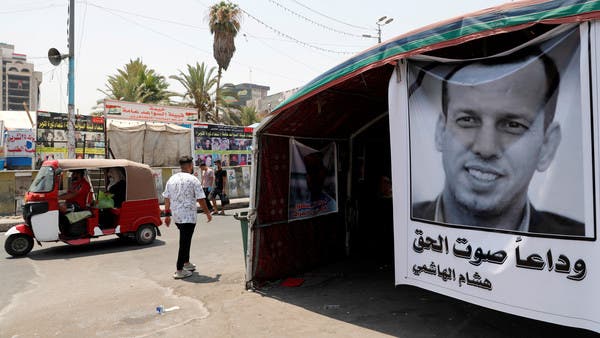 Authorities have arrested multiple people who were involved in the murder of Iraqi journalist Hisham al-Hashemi, Iraq’s Prime Minister Mustafa al-Kadhimi said on Twitter on Friday.

“We promised to capture Husham Alhashimi’s killers. We fulfilled that promise. We have arrested hundreds of criminals – murderers of innocent Iraqis like Ahmed Abdulsamad. We don’t care about media spin: we carry out our duties in the service of our people & in pursuit of justice,” the prime minister tweeted.

For all the latest headlines follow our Google News channel online or via the app.

We promised to capture Husham Alhashimi’s killers. We fulfilled that promise. We have arrested hundreds of criminals – murderers of innocent Iraqis like Ahmed Abdulsamad. We don’t care about media spin: we carry out our duties in the service of our people & in pursuit of justice.

The prime minister did not provide details about the identity of those arrested. However, a retired brigadier general in the Iraqi army told Al Arabiya that one of his killers was a lieutenant in the interior ministry and had confessed to being affiliated with an armed militia.

Al-Hashemi, a 47-year-old researcher, journalist, and informal advisor to al-Kadhimi, died on July 6, 2020, after he was shot by three unknown gunmen outside his home in east Baghdad.

Following his death, al-Kadhimi had vowed to bring his killers to justice, saying: “We promise the killers that we will go after them so they may be served their just punishment.”

Al-Hashemi had reportedly been getting into his car when the gunmen on two motorcycles fired at him from meters away.

The journalist was wounded at first and managed to duck behind his car, but the gunmen approached him and shot him four times in the head at close range, investigators told reporters at the time.

AFP cited a medical source as saying that al-Hashemi had suffered “a hail of bullet wounds in several body parts.”

Secret documents that allegedly belong to the late Iraqi activist may have been the reason he was assassinated, Al Hadath reporter Roula al-Khateeb had said in July 2020.

An unnamed source – reportedly a senior government official – told Al Hadath that he had acquired the documents from another individual, who said had received them from al-Hashemi.

Al-Hashemi, who publicly supported the popular protests that broke out in Baghdad in October, had told the official that he had a feeling that something was going to happen to him and that he wanted the information to be publicized if it did, al-Khateeb said.

The documents, given to Al Hadath by an unnamed source, revealed that members of the Iran-backed Popular Mobilization Units (PMU) militias have been manning checkpoints alongside Iraqi security forces across Baghdad and using their position to extort money from Sunni citizens.