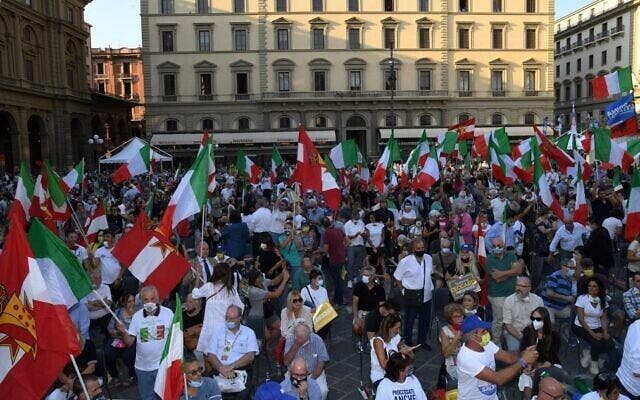 The pandemic and the country’s new technocratic government has only emboldened far-right forces in the pandemic hit nation. Can Italy find a solution to the growing threat of the far-right?

Earlier this month, Italian police foiled an extremist right-wing plot to bomb a NATO military base in the country and Italian authorities have expressed growing concern that right-wing extremism is becoming increasingly common.

The most recent attempt by right-wing extremists was from the Roman Aryan Order, inspired by neo-Nazi and white supremacist beliefs, which police believe is also connected to the Portuguese far-right.

Experts on the far-right in Italy and Europe believe that the Covid-19 pandemic has only resulted in more right-wing extremism across the board, particularly in Italy. Growing opposition to lockdowns, mask mandates, and Italy’s economic fallout has boosted the far-right’s popularity in the country.

One such group to take advantage of the situation has been the Brothers of Italy, a small but significant political party in the country, which under the guise of Covid-19 pushed hard for borders to be shut.

The Brothers of Italy spread anti-immigrant propaganda that refugees from Africa would bring Covid-19, even as the country was in the midst of the pandemic. The party is currently polling around 20 percent of the national vote.

How did Covid-19 impact the far-right

Italy had averted an immediate danger of falling to right-wing Eurosceptic forces. Fast forward to today, however, and the Italian public is falling for Georgia Meloni, the leader of the Brothers of Italy.

Her party’s slogan is “God, Homeland and Family,” a fascist era mantra that has resonated in the country, which has seen one of the worst death tolls from Covid-19.

The economic impact has been even more severe. Italy is receiving the largest financial aid package in the European Union, standing at more than $300 billion.

Going into the pandemic, Italy’s economy was still reeling from the 2008 financial crisis, which boosted the country’s far-right in the polls.

The economic downturn in the country has been significant following the pandemic, with the country’s GDP shrinking by almost nine percent. Youth unemployment in the country stands at 30 percent in 2020, one of the highest rates in Europe.

The pandemic has also resulted in birth rates declining even more steeply in the country that was already suffering from a demographic crisis.

In 2020 alone, the country’s population declined by almost 400,000 people as the number of deaths hugle outnumbered births.

All of these numbers have given far-right parties an opportunity to exploit fears that the country is in decline economically and demographically.

According to Italy’s Interior Minister Luciana Lamorgese, online radicalisation in Italy by the far-right is on the increase, with young people in particular being susceptible to propaganda by extremists groups.

‘Globalist elites’ that run Italy and immigrants threatening to ‘swamp’ the country are seen as the primary drivers to convince people that the ills facing their country are coming from abroad and only a return to the values of the past will redeem the country.

The country is not expected to return economically to its pre-pandemic level in 2019 until at least until 2025, say analysts.

Rate this post
The Hottest Housing Markets In California In 2021