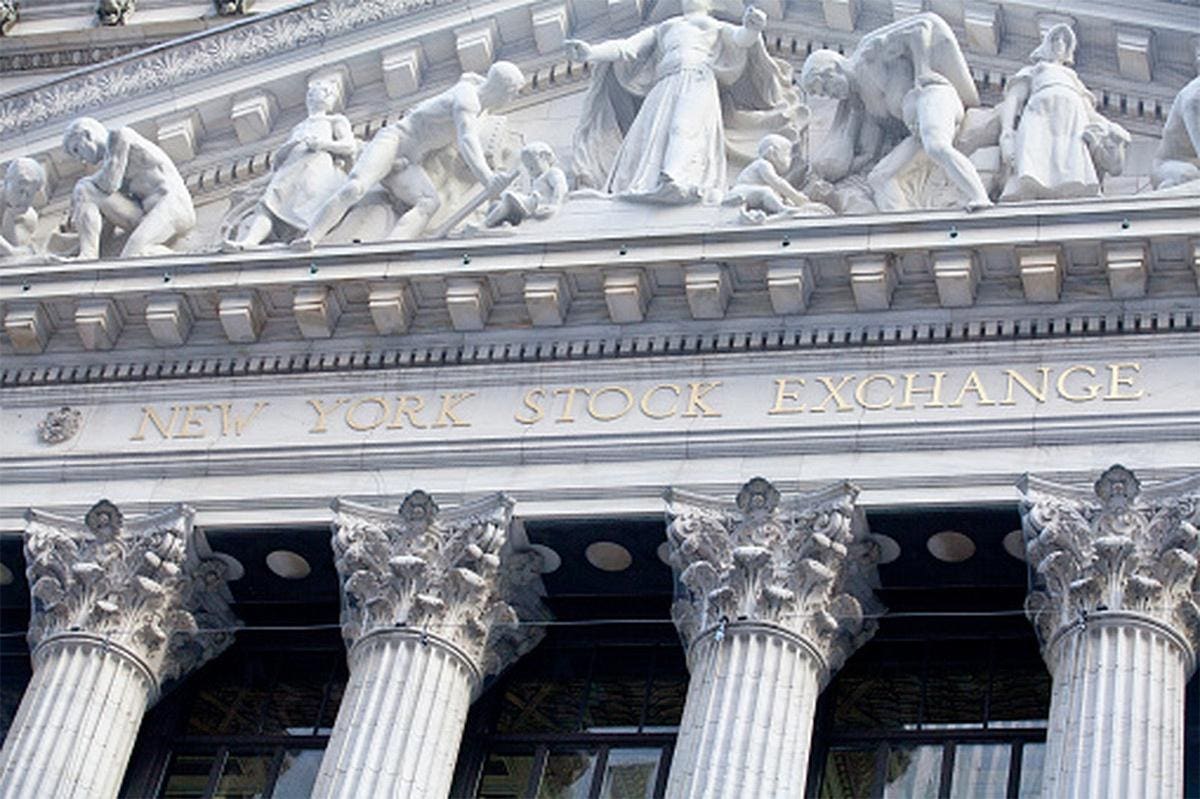 For the third straight morning, it’s earnings to the rescue.

After Monday’s nosedive, stocks seem poised to rise again this morning based on pre-market gains as investors watch major companies exceed Wall Street’s expectations. AT&T (T) became the latest to impress, helped by HBO Max and a guidance lift. CSX (CSX) shares are also climbing on an earnings beat for the railroad company.

American (AAL) and Southwest (LUV) had pretty nice results, too, though their shares aren’t showing it at the moment. Leisure fares continue to pick up at a good pace, and business travel is doing better than expected but not back where people would like to see it. Also on the transport side, Union Pacific shares rose in pre-market trading, helped by firm earnings. It’s often a good sign for the economy when the railroads do well.

The news wasn’t so good over at Texas Instruments (TXN), where shares fell 4% in after-hours trading after the company’s forecast apparently failed to impress investors.

Also on the negative side, initial weekly jobless claims unexpectedly jumped to 419,000, compared with Wall Street’s average estimate of around 360,000 and a nearly two-month high. It’s just one number, so nothing to get too crazy over, but we’ll have to watch the next few Thursdays and see if it’s more than a blip.

Stocks have now erased basically everything they gave up on Monday, but keep an eye out for possible profit-taking pressure as the weekend approaches. Also approaching are quarterly reports from Twitter (TWTR) and Intel (INTC) this afternoon, followed by American Express (AXP) and Honeywell (HON) on Friday morning.

Together, those companies could provide insight into a bunch of dynamics, including consumer demand, the semiconductor supply picture, industrial production, and the social media space. Remember to keep monitoring executive comments on anything related to inflation. HON could be a good one for insight into that.

Earnings looked pretty good across the water in Europe earlier today, helping lift stocks there as the European Central Bank (ECB) kept rates unchanged. Travel and leisure stocks performed well in European trading, and seem geared up to do the same here in the U.S., judging by gains in the pre-market hours. Gains are also evident in the U.S. 10-year Treasury yield, now flirting with 1.3%. The yield actually hit 1.3% earlier, and that’s a level to watch. Getting above it would probably help the Financial sector, which tends to perform better when yields strengthen.

Overall, the Delta variant fears exploded on Monday but then quickly calmed over the next two days. This could also be in part due to earnings, because many reporting companies have said they’ve seen no impact from the new variant.

As earnings roll along, keep in mind that with earnings expectations so high in general, it probably takes a really big beat for a company to impress. That could help explain why the bank stocks didn’t get much of a bump from last week’s strong results. Investors had arguably built strong earnings into prices, and some may have taken profit when the news actually hit. We could see more of this going forward, especially with the mega-cap Tech companies having recently reached new all-time highs.

Having said all that, a look at S&P 500 earnings to date shows the vast majority of companies not just matching high expectations, but exceeding them. For instance, of the 23 companies that reported Wednesday morning, 20 came in with earnings per share that beat the Street’s average estimate, and 19 surpassed analysts’ revenue projections.

All this probably helped play into the recovery that continued Wednesday. It’s been a pretty amazing rebound, really. That “buy-the-dip” mentality has played well. It’s like a football coach that runs the same play that keeps working. You might argue there’s no reason to change that play. It’s certainly working again.

The “Fed put” also seems to remain in place. That’s a term coined decades ago by traders who got the idea that the Fed would step in to support stocks in any downturn. Fed Chairman Jerome Powell said nothing immediately after Monday’s Wall Street plunge, but perhaps he didn’t have to. Just last week he told Congress the Fed remains committed to its easy money policy, and that elevated inflation is likely to cool off. None of that sounds particularly hawkish, and may have contributed to the decline in bond yields since he spoke.

Yield Train Still Not Completely Back on the Rails

Those falling yields appeared to temporarily upset investors, some of whom thought they might signal a slowing economy. Strong earnings helped stabilize things by mid-week, and the 10-year Treasury yield has recovered to this morning’s level near 1.3%. That’s still near historic lows and well below levels from earlier this year.

There may be long-term technical support in the 1.2% to 1.25% area. A move below that earlier this week flamed out, but sometimes such sharp moves get followed quickly by another test of the lows, so we may not be out of the woods yet.

Though Financials continued to rally Wednesday, this low yield situation isn’t ideal for bank investors, as bank stocks tend to do better in higher rate environments. Consider keeping an eye on the bank stocks today and tomorrow to see if they start to feel any heat from these weak rates.

Gearing Up for Another Fed Check-In

Speaking of rates, the Fed meets next week and is widely expected to do nothing. Talk earlier this summer was that the Fed might announce a stimulus tapering at its Jackson Hole symposium in late August, but now that’s up for question, too. This continued pressure on yields doesn’t exactly put the Fed’s feet to the fire about needing to react. Meanwhile, low yields tend to create a positive environment for stocks, which could explain why Monday’s selloff appeared to vanish so quickly.

With all this in mind, you might hear some people say we’re back in “TINA” (there is no alternative) territory. That’s an acronym coined to describe a situation where people get drawn toward stocks because yields in corporate and government bonds, as well as cash, remain near historic lows.

You can debate the TINA philosophy, but for now investors seem a bit more positive about the stock market than they did a few days ago. Strength in crude and the comeback in bond yields that contributed to a slight widening of the yield curve by mid-week—along with the firm earnings results and analysts and executives saying they don’t see a major impact from the Delta variant—all could play into this. While things look pretty good at the moment, remember that we could be in a pattern where the market performs well at mid-week before losing ground toward the weekend, especially if Covid headlines keep dominating.

Q3 Airline Profit Cleared for Takeoff: Airline shares came into earnings season dragging their tails, and then got absolutely pounded in Monday’s selloff amid fears of the Delta variant of Covid. So it’s been a pleasant surprise to watch their earnings results so far. Executives from Delta (DAL) last week and United (UAL) this week both sounded optimistic about a travel comeback. Neither has seen any impact yet from Covid’s Delta variant.

UAL reported losses narrowing in Q2 and, more importantly, forecast profits in Q3 and Q4. Business travel is accelerating more quickly than UAL anticipated, the company said in its press release. “Looking ahead, the company expects continued gains as more businesses return by (the) end of summer and into 2022, with a full recovery in demand anticipated by 2023,” the press release added. One thing investors might want to track is capacity growth, which can provide a real sense of how much demand airlines expect. UAL expects Q3 2021 capacity to be down around 26% compared to Q3 2019, before the pandemic, but up 39% quarter over quarter. This could help explain all the new planes it just purchased.

Are We Overthinking Delta? Like many investors, you’re probably wondering about the possible long-term economic impact of the Delta variant. It might not be as disruptive as some think, according to Northern Trust Global Asset Allocation. The firm released a note recently subtitled, “Investors Will Tolerate New Virus Strains,” adding that more effective vaccines and public health policy “should limit their impact on the global growth outlook.” The analysts don’t think stringent restrictions will return to the U.S., and noted that mobility data (or tracking of peoples’ movement out and about) hasn’t slowed in the U.K. or the U.S.

“While it is possible economic activity in low-vaccinated areas may suffer from virus setbacks, those areas make up a small proportion of global economic growth,’ the analysts wrote. “For key growth regions, growing immunity and a high bar for governments to reenact lockdowns leave the path to some form of economic normalcy intact for now.” That’s all barring a significant setback to vaccine efficacy, they added.

How’s Your Appetite? For anyone who doesn’t have a “beef” with more companies going public, here’s one with some spice: Portillo’s, the fast-food chain known for a Chicago specialty sandwich called “Italian beef,” is planning a public offering. Portillo’s, based in the Chicago suburbs, is targeting a $2.5 billion to $3 billion valuation, The Wall Street Journal reported, but the number of shares and price range haven’t been decided. The chain goes back to 1963 when its founder sold hot dogs from a trailer, and now has more than 60 restaurants and $455 million in sales.

For those who’ve never had it, Italian beef is a sandwich of thinly shaved beef in a garlicky beef gravy often accompanied by hot or sweet peppers on a thick roll that absorbs the juices. It’s frequently enjoyed in combination with a thick, spicy sausage link (a sandwich called a “combo”) and an order of crunchy Chicago-style French fries. In the Windy City, debate has raged for years about which outlet features the best beef sandwich, and local newspapers frequently rank Portillo’s among the top contenders.