Dubai: Scottish Premiership champions Rangers were celebrating once again on Sunday night as the Burj Khalifa in Downtown Dubai lit up in their famous blue, white and red colours to mark their 55th league title.

One day after their 4-0 demolition of Aberdeen to mark an amazing season in which they went undefeated and collected a record haul of 102 points to dethrone arch-rivals Celtic as champions of Scotland, Dubai based fans clubbed together to see their favourite clubs colours splashed across the tallest building in the world in a light show to be seen for miles around.

In marking the occasion, Rangers became the first football club ever to light up the Burj.

Faithful Light Blues fans raised the Dh135,000 to put on the 90-second show to pay tribute to the club that ended a decade of dominance domestically by Celtic, with manager Steven Gerrard revolutionising Rangers’ fortunes over the past season. 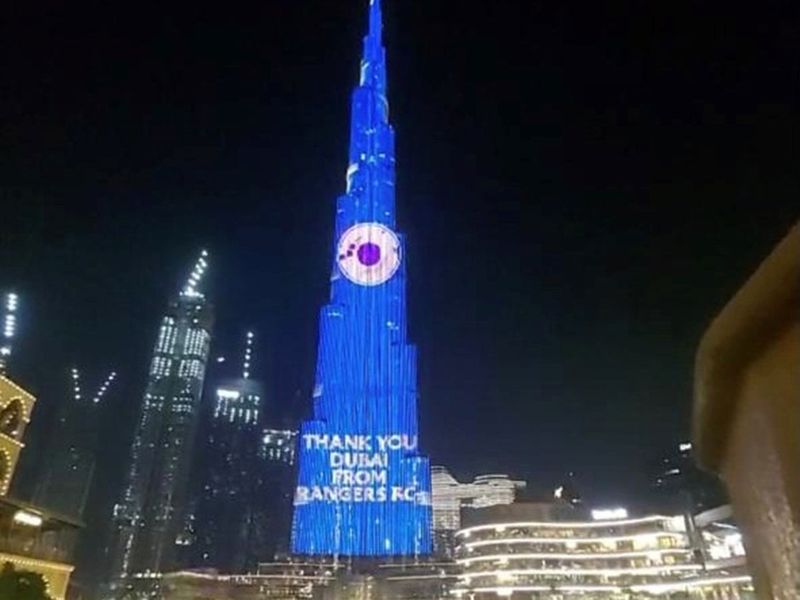 “For us, this is an incredible achievement for us and our famous club, winning the title after 10 years,” said Simon Ritchie, one of the Dubai-based fans. “What made this moment even more special is we lost one of our fan club members, Teddy Munro, so it was symbolic and a tribute to him too.

“We also wanted to give a sign to the fans around the world how Dubai has played its part in this tremendous club.”

Another loyal fan in the UAE, Andrew Bremner, added: “An amazing day. So historic. We are the first football team to be up on the Burj Khalifa and it is something we will always remember.”