Abu Dhabi: A one-year-old Emirati baby with a progressive muscular disease has been successfully treated with an advanced genetic treatment that will prevent further deterioration.

“I first noticed abnormal movements in Afra when she was only three months old and quickly consulted a paediatric physician. After multiple tests, Afra was diagnosed with SMA, and transferred to the Sheikh Khalifa Medical City (SKMC),” said Afra’s mother said.

The SKMC medical team sprang into action and developed a comprehensive treatment plan to prevent further deterioration. This included importing a genetic medicine, which has viral vectors that target the affected neurons, inserting copies of normal SMN1 genes inside. Following this, the muscle condition improves in terms of movement and function.

“Afra’s journey towards recovery is a significant achievement, not just for the A u Dhabi Health Services Company (Seha) network [which includes SKMC], but for the wider healthcare ecosystem in the country, as we provide hope and create impact for families with children diagnosed with SMA,” said Dr Mariam Al Mazrouei, SKMC chief executive director.

Colmar Tropicale: Day Trip in a French-themed Resort in Malaysia 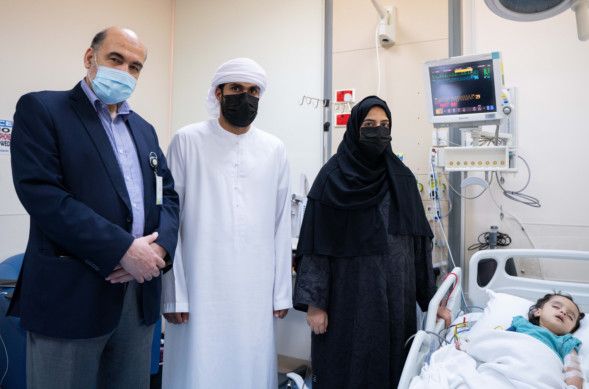 “The key to successfully overcoming SMA is early diagnosis and implementation of a vigorous treatment strategy. This keeps the neurons as intact as possible and prevents further damage,” said Dr Omar Ismail, paediatric neurology consultant and head of paediatric neurology at the hospital.

“In Afra’s case, even though she was brought in quite late with affected limbs, we quickly jumped into action with an inclusive treatment plan that prevented further deterioration of her muscles while we waited for the required genetic treatment to arrive from abroad. This particularly helped with Afra’s breathing muscles, and eliminated the need for an artificial respiratory device,” Dr Ismail said.

Baby Afra will continue to be followed up by doctors at SKMC.

“The medical team has implemented a robust treatment plan. I am tremendously grateful to them for their diligence in treating my daughter,” Afra’s mother said.

According to the Centre for Arab Genomic Studies, the prevalence of SMA in GCC populations is thought to be at least 50 times higher than in the United States, with more than 50 cases per 100,000 live births, compared to only 1.2 in the United States. It is one of the diseases that the Abu Dhabi Emirate’s Premarital Screening and Counselling Programme screens for, before couples wed, in order to alert couples about possible risk.