LAHORE: A bomb attack in Lahore on Wednesday killed three people and wounded 14 others, including some police, police in the eastern Pakistani city said.

Those wounded by the powerful blast in a residential area included local people and some police officers who were manning a checkpoint set up next to the house of Hafiz Saeed, the founder of Islamist militant group Lashkar-e-Taiba (LeT).

“Apparently what we see is that our law enforcement agencies are the target,” provincial police chief Inam Ghani told reporters. “You can see our police officials are also wounded.” Some of the wounded, including children, were in critical condition, a hospital spokesman said.

No one claimed responsibility for the bombing.

An eyewitness, Fahim Ahmad, told reporters at the scene that a car parked close to a house had exploded and set nearby cars and motorcycles on fire.

Ghani said the police were investigating whether the explosives had been detonated remotely or by a suicide bomber.

Had it not been for the police checkpoint, the car could have reached Saeed’s house, he added. 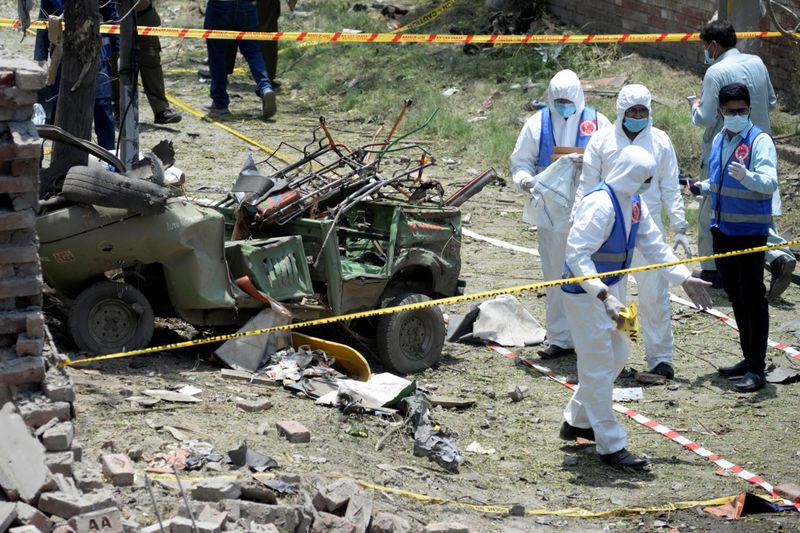 Members of the Counter Terrorism Department survey the site after the deadly blast in a residential area in Lahore. Image Credit: REUTERS

Lashkar-e-Taiba was blamed for the 2008 Mumbai attack that killed 166 people, including foreigners and Americans.

Saeed, who now runs a LeT linked fundraising/" 14862 target="_blank">charity, Jamat-ud-Dawa (JuD), was sentenced in November to 10 years’ imprisonment after being found guilty of two charges of financing terrorism.

A JuD spokesman told Reuters Saeed was in prison and so not present at his house on Wednesday.

Islamist militant groups have been trying to make a comeback after Pakistani army offensives in their sanctuaries along the Afghan border, but urban areas like Lahore have been largely spared the recent violence.