Kolkata: Australian cricket looked a divided house as their star bowling attack opened up on Tuesday against the insinuations of them being aware of the plan in ‘Sandpapergate’ in South Africa in 2018 – which resulted in bans on the erstwhile captain Steve Smith, vice-captain David Warner and opener Cameron Bancroft.

Michael Clarke, former Australian captain, had joined the issue with former Test opener Bancroft, who said the bowling unit was complicit to the plan – thought Bancroft has now moved to defuse tensions from his bombshell interview by reaching out to Australia’s bowlers and telling CA he had nothing to add to his 2018 testimony.

In a joint statement released to Australian media, Pat Cummins, Josh Hazlewood, Mitchell Starc and Nathan Lyon called for an end to the “rumour-mongering and innuendo” relating to the incident.

The quartet, who did not take any names, left little to imagination when they said: “We pride ourselves on our honesty. So it’s been disappointing to see that our integrity has been questioned by some journalists and past players in recent days in regard to the Cape Town Test of 2018.”

“We have already answered questions many times on this issue, but we feel compelled to put the key facts on the record again:

“We did not know a foreign substance was taken onto the field to alter the condition of the ball until we saw the images on the big screen at Newlands. And to those who, despite the absence of evidence, insist that ‘we must have known’ about the use of a foreign substance simply because we are bowlers, we say this: The umpires during that Test match, Nigel Llong and Richard Illingworth, both very respected and experienced umpires, inspected the ball after the images surfaced on the TV coverage and did not change it because there was no sign of damage.” 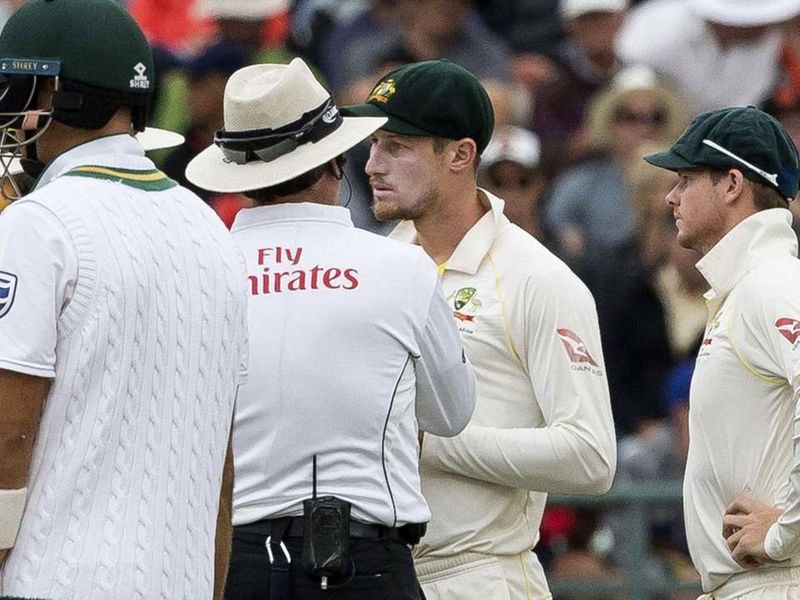 The defining moment: Cameron Bancroft (centre) is being questioned by the umpires regarding ball-tampering in South Africa. Steve Smith can be seen in the distance. Image Credit: AP
UK students using orange juice to get fake COVID positive test results

The clarification from the bowlers’ side, which some may not find tenable, raises questions about the mutual trust and bonding of the side – while England seam bowler Stuart Broad tried to stoke the fire by saying it will be ‘‘interesting’’ to read a book written by Warner whenever the latter retires considering the conversation that has cropped up in recent days about the 2018 ball-tampering scandal.

“I have seen a couple of comments from David Warner’s agent, too, and I think it will be an interesting time when he stops playing for Australia and writes a book,” said Broad, according to ESPNCricinfo.

Broad said that the incident may not be the focus during the Ashes later in the year but the England fans may have a few chants about it.

“There’s no doubt the Aussies would have been hoping this episode was signed sealed and delivered. It was an incredibly tough thing for those three players to go through. I can’t see it still being a conversation when the Ashes start in November, December, but I can see it being sung in the Barmy Army stands if they’re allowed,” said Broad.

“I’ve obviously never bowled within the Australian bowling attack but I can talk about how, in an England Test team, if I miss the seam by four millimetres, Jimmy Anderson is on me. He’ll be saying why has this ball got a mark on it here? It’s because you’ve missed the seam! Start hitting the seam, will you,” said Broad.

Rate this post
Bitcoin: Where do We Stand In Summer 2021?