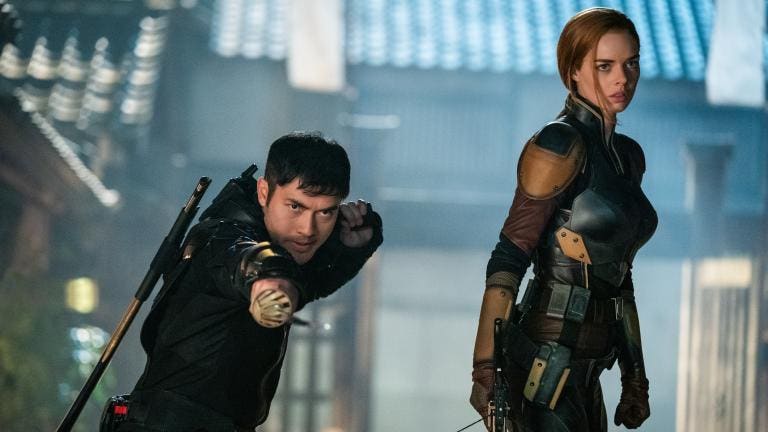 Paramount’s Snake Eyes: G.I. Joe Origins is so surprisingly, well, decent, in terms of visual polish, character specificity and crafting a narrative somewhat less conventional than a stereotypical “Save the Cat” origin story, that it’s almost heartbreaking to see it falter as an action picture. There is lots of practical fisticuffs and iconic action posing, including at least one neon-colored sword fight on a rooftop (+10% right there), and plenty of big-budget ninja spectacle. Despite hugely impressive staging (courtesy of Kenji Tanigaki), and unimpeachable stunt work, the copious fights and periodic chases are shot via seemingly arbitrary “shaky cam” and edited with a “Liam Neeson takes 15 cuts to climb a fence” clarity. Not since Quantum of Solace has there been a bigger gulf between the craftsmanship on display and how that spectacle plays onscreen.

That the film doesn’t automatically dip below recommendation levels despite the misguided action editing is a testament to how good much of the rest of it is. Pour one out for Stephen Sommers’ painfully underrated The Rise of Cobra (which near-perfected the MCU formula two years before Thor and Captain America) and Jon M. Chu’s inexplicably prescient Retaliation (which became the most politically accurate blockbuster of the post-9/11 era). This Henry Golding-starring “origin story” is a reboot of the G.I. Joe mythos, even if it mostly keeps the G.I. Joe “stuff” on the fringes. Most of the 121-minute actioner is focused on compelling ninja melodrama. The “cinematic universe” stuff rears its ugly head in the final reels, but Rise of Cobra similarly almost collapsed in its final 20 minutes as well.

The Skydance/Hasbro/MGM flick cost  $88 million, compared to the $135-$175 million predecessors, but it looks gorgeous and cinematic in a way we used to take for granted in the pre-Netflix Originals days. Set mostly in Japan, this flick gets off to a wobbly start with our young hero watching his father get shot dead, a scene that provides a laughable reason for his nickname. Things improve once he gets recruited for weapons smuggling and crosses paths with Thomas “Tommy” Arashikage (Andrew Koji) and saves his life at the near-expense of his own. The new friend isn’t a Yakuza mobster but rather a high-ranking member of an ancient Japanese clan. In gratitude and friendship, Thomas offers “Snake” a chance to earn his way into the sect and find a purpose to an aimless life.

#98 How to have courageous conversations

The screenplay, primarily penned by Evan Spiliotopoulos (whose The Unholy is one of the year’s best horror movies), makes the wise choice to focus on the bromance/friendship between Snake and Tommy as well as the process by which the future Joe might become part of the family. Koji is dynamite in this film, almost stealing the picture and casting a striking action figure alongside the more famous top-billed star. It’s frankly a problem when Thomas takes a backseat to a not-quite-romance between Snake and Akiko (Haruka Abe). Abe is fine with what she’s given but her character and her increasing emphasis feels like a midway “no homo” “course correction” even while neither of Snake’s primarily relationships are romantic in nature. Both Peter Mensah and Iko Uwais bring an action prestige to the proceedings.

The film offers a few genuine twists or at least plot beats/character reveals that go comparatively off-script for these kind of IP exploitations. At least one early second-act reveal recasts everything that’s come before and everything that follows without undercutting the previous 40 minutes. I don’t know how faithful this is to the Larry Hama comics, but it works for the movie. Snake Eyes is enjoyable enough as a singular ninja action drama that it suffers via the eventual intrusion of the G.I. Joe elements. Úrsula Corberó vamps like a champ as Baroness, while Samara Weaving makes a serviceable action figure as Scarlett. Alas, neither hero/villain comes off well regarding value to the proceedings. Like Cruella, you’ll wonder how much better Snake Eyes could have been without having to rely on known IP.

To be fair, it’s not like Ninja Assassin, The Hunted or any of the American Ninja sequels were big hits in their day. Ninja/samurai movies usually have to have some IP attached, be it James Bond (You Only Live Twice and/or The Man With the Golden Gun), the X-Men (The Wolverine), the Dark Knight (Batman Begins) or Tom Cruise back when he was enough (The Last Samurai). The relationship between Golding and Koji makes the generic story beats work beyond Mad Libs plotting and G.I. Joe insertions. While Golding is fine, it’s another example of an incredibly charismatic leading man/romantic lead (see – Crazy Rich Asians and A Simple Favor) having his onscreen charm and star wattage toned down in service of a generic franchise action-hero leading role. Does that count as “inclusivity progress?”

And, yeah, for a movie that contains as much action as it does, and there’s a lot of varied combat set pieces, it’s a damn shame director Robert Schwentke and editor Stuart Levy shoot them like a bad Greengrass knock-off and then cut them to ribbons in the editing room. I won’t pretend to know why this went down, but for a movie that wants to be as bad-ass as The Raid and John Wick (minus the R-rated gore, of course), the actual onscreen spectacle leaves much to be desired in terms of mere comprehensibility. Viewers will be left asking basic “What happened why?” questions and wishing that certain crowd pleasing set-ups didn’t pay off entirely offscreen. It’s like the opposite of Ninja Assassin, which had a nothing story but jaw-dropping (and gore-drenched) action sequences.

Snake Eyes: G.I. Joe Origins is a better “movie” than I expected, with richer character work and stronger relationships than most unrequested IP reboots even as it completely drops the ball as an action film. Whether that’s a dealbreaker will be up to each of you, as I (for example) still appreciate the hell out of Quantum of Solace despite the Bourne Ultimatum-ish editing choices. The G.I. Joe stuff feels every bit as shoehorned in as it likely is, but the stuff that surprises (like the genuinely terrifying “third trial”) makes it worth a watch. I still think The Rise of Cobra is the best G.I. Joe movie, but Snake Eyes plays as a casual Saturday matinee. And before these films became mega-budget must-succeed IP exploitations, that would have been more than enough.