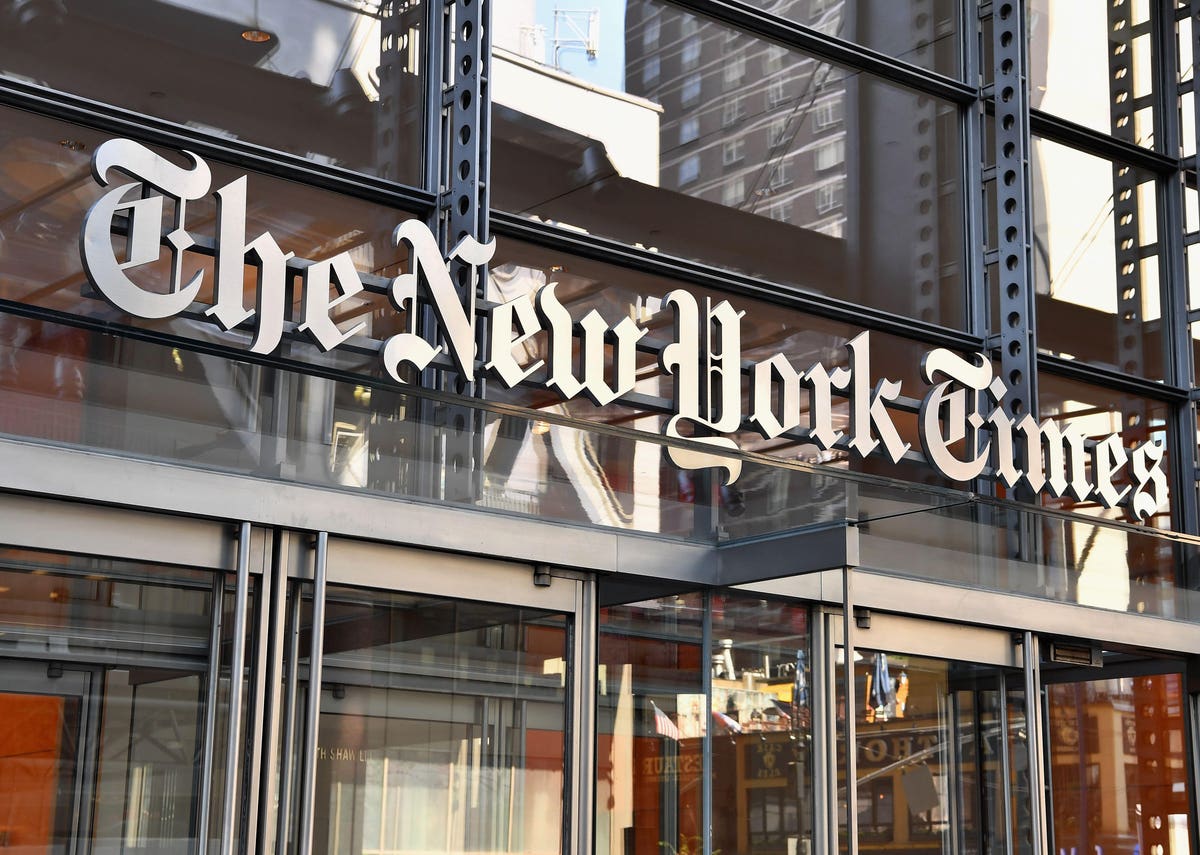 I don’t remember much about high school, other than wanting to get it over with as fast as possible. Which is one reason, among many, why I wasn’t prepared for the relentless assault of nostalgia that The New York Times‘ Odessa podcast hits you with in its opening moments. What you hear, right away, are seemingly ordinary high-school students in a small, ordinary town, living out the last, best days of their wonder years. The sounds are of slamming locker doors. The din of voices echoing in those long hallways. And that sing-songy lilt to chatter about so many insignificant things — band practice, freshman year memories, who’s sitting beside who on the bus. Maybe it’s the toll of the year we all just lived through. But listening to Odessa, it’s hard, at first, not to want to disappear through the headphones and be back … well, back “there” again.

But then, audible giveaways start to ground all this in the here and now. Some of the voices heard in the first few moments of Odessa sound a little muffled, and you start to remember, oh yeah, the face masks that people are wearing. One band student can be heard reminiscing to another about what a bizarre year it’s been. “It feels like just yesterday, I came in as a freaking freshman. I didn’t know how to play … Never thought there’d have been a pandemic.”

Everybody please keep your mask on, the students are told.

Welcome to Odessa, Texas — to the town that inspired Friday Night Lights, and which at this particular moment in the pandemic year of 2020 is grappling with the implications of a statewide mandate that public schools must offer in-person learning. A NYT audio documentary team decided to follow along, remotely, with this experiment in reopening a school during a global health crisis. Which gave the journalists not only a virtual front-row seat to this unprecedented logistical challenge.

It also let them track the emotional toll that life in lockdown has taken on children and their families, in a town where coronavirus cases surged to the point that it devastated the local economy.

Pretty quickly, listeners are introduced to people like Naomi Fuentes. She’s a college preparatory and career readiness teacher at Odessa High, and the podcast’s voice of calm and can-do cheerfulness. A quality that she tries to sprinkle, like magic dust, into her remote learning sessions with students. Students whose faces, by the way, she generally never sees when they log into class on their computer.

Those students almost always have the video turned off, because Fuentes doesn’t require it to be turned on — because it would take up too much bandwidth.

When and how to reopen schools became one of the most hotly contested battles of the pandemic last year. News coverage at the time told the story in increments, but a podcast like this one stands in a class (no pun intended) of journalism all its own. Because we see the whole thing unspool from the vantage point of students like Odessa senior Joanna Lopez. And teachers like Fuentes.

We hear how students retreat inside themselves, alone and physically disconnected from other students. The grinding uncertainty of what this all means. The terrifying effect that the pandemic is having during an inflection point in their lives — that moment when they’re finally becoming the first adult version of themselves. Parents don’t always understand what’s happening, that school rules post-COVID outbreaks seem made up on the fly. Harried school officials, in fact, race to adjust those rules on the fly, because they’re learning about this horrible thing, the COVID-19 virus, in real time.

Students log on for their remote class sessions from beds. While babysitting siblings. And even half-listening, while they work jobs that could disappear at any minute.

“Maria, we’re going to start with you,” Fuentes says at one point, instructing a remote student to start reading a particular piece of text.

“ … In my mind,” Fuentes tells the NYT team, recounting the moment, “I know it doesn’t take that long to un-mute.” Classes have become awkward like that, full of digital inconveniences that weren’t there before.

You don’t really know if the kids are listening, remotely, or if they really understand. Or if some of them are listening to class in one ear while they’re actually at work, which is the case with Lopez. She took a job to help her family pay the bills. Because that’s what you do, if the hours your employer gives you conflict with remote classes. You pop in an earbud at work and follow along as best you can.

4 Strategies for Setting Yourself Apart as a Recruiter

For the first several weeks of school, as you might imagine, the virtual students require an outsized share of Fuentes’ attention. You hear how much she’s struggling, in fact, with how to split her focus, between the remote students and the few who are in front of her, in-person.

She keeps a 64-ounce container of hand sanitizer close by. As scared as she is about all this, though, Fuentes tells the podcast crew that she would never dream of not coming back to work. At least, not willingly. “OHS is my home.”

All of which is to say: More than any of the pandemic-themed news coverage over the past year, Odessa is a piece of journalism that’s remarkable for the narrative space it makes available for its subject. The podcast simply offers its listeners a fraught, heartbreaking and very human piece of journalism.

Of a sort that tends to get lost in all the X’s and O’s of coronavirus coverage.

A new pronouncement from the CDC, a fresh interview from Dr. Fauci, perhaps a change in vaccination statistics — those are some of the necessary components of journalism that, at the same time, also don’t leave much room for certain important questions. Like, how are you feeling about all this? How has your life changed?

NYT producer Annie Brown’s is one of the voices we hear most often during Odessa. She and the rest of the audio team followed this story remotely for several months. And that pace uncovered things you miss amid the normal cadence of a news cycle. “In the beginning,” Brown told me in a phone interview, “we didn’t know if these schools would just shut down because of massive outbreaks. The story became less about tracking outbreaks — that was part of it — but more about the social, emotional aspects. And people’s experiences in the classroom. How relationships were affected.

The resulting 4-episode podcast, she continued, is really a testament to what happens when you as a journalist “just stick around.”

“I was really surprised by the phenomenon of these teenagers retreating into themselves as a response to COVID,” Brown continued. “I think I went into this with a hypothesis that students who were forced to spend much more time alone during the school year would be craving social contact. Would be missing their friends. But instead, kind of the opposite happened — where they get so used to isolation that they crave it.”

As respectfully as the NYT team handles the storylines throughout Odessa — including heartbreaking moments, like when students ostracize a fellow student who tested positive — it’s hard not to come away, at the end of it all, with the following thought:

There’s no politics whatsoever to be found in this podcast. No urgency, no alarm bells sounded, and nothing that a listener could construe as a scale being obviously titled to one side or the other. I found myself wondering more than once, as I listened, that it might go a long way toward fixing many of the ills that still beset us at this point in the pandemic, like vaccine hesitancy, if we had much more journalism like this. If we had reporting that’s less about capturing a headline-making event of the day and more about helping people just understand what it’s like to live with all this.

Perhaps, if we had more of that, someone like 45-year-old Missouri mother Tricia Jones might not have been overly scared of the perceived side effects of the COVID-19 vaccines. Sadly, though, based on all the information she’d reportedly heard and seen, she avoided the vaccines, ended up contracting the Delta variant of the coronavirus and died in the hospital.

More than ever, it seems, the pandemic has also uncovered the pre-existing fault lines that separate us. Journalists have played a role in that. Facts and objective truth, by definition, are divisive. But there are times, such as during a global health crisis, when it makes sense to try and go beyond, to venture down to a deeper narrative sedimentary layer. To the point where you, as a journalist, are simply bearing witness to real life, reflecting a bit of humanity back at readers and listeners.

When a piece of journalism like Odessa does that, when it connects with a person’s heart, it also has a chance to do something powerful — to change their mind.