The trek of a lifetime

Our many ghostly celebrations

The life-changing power of ‘No’

The trek of a lifetime

I am a trekker with my fair share of treks. It includes Tirchmir, Nanga Parbat, Makra and many high lakes and road trips in Pakistan. In July 2018 our small group of trekkers traversed the Biafo and Hispar glaciers in the Karakoram Mountains of Northern Pakistan. For the uninitiated, the two glaciers are connected by the 5,128 metre Hispar Pass.

Along the way, we camped and explored the Snow Lake, one of the largest expanses of ice in the Karakoram Mountains. To reach Sakardu from Multan, it took us around 26 hours. In the outrageously beautiful north of Pakistan, Skardu is the focal Valley of Gilgit-Baltistan — an encapsulation of magnificence, peacefulness and wild. The route to some of the world’s most astounding mountains (K2, K3 among others) are all associated with this valley.

Snow Lake — Hispar La Trek is a high altitude glacier basin over 16 kilometre wide. Located at the head of the Biafo and Hispar glaciers, the ancient highway of ice connects the two great mountain kingdoms; Hunza in the west and Baltistan in the east. Combined, the Biafo Hispar and Biafo glacier is 120 kilometres, which makes it the second longest glacier in the world outside the Polar Region.

The route to Snow Lake base camp located in a high-altitude glacial basin in Gilgit-Baltistan
Image Credit: Supplied

The key part of our journey was from Skardu Valley towards the Askole Village. Askole, located about 85 kilometres from Skardu, is Pakistan’s remotest village. This is the last human settlement before trekking up to Baltoro glacier, Biafo glacier and Chogtai glacier.

Mostly people stay in Askole for a night to arrange for porters. However I was very desperate to get on with this trek because I had been planning it for months, having already arranged everything including our meals for 15 days of the trek.

We didn’t stay in Askole and started our trek towards the Namla, which is the first base camp of this route. To reach Snow Lake we had to cross seven base camps. The distances between each camp is 6-7 hours. Next day we were on the mighty Biafo — a 67 kilometres long glacier. Its tributary glacier, Sim Gang, is one of the world’s largest basins of snow or ice, and can go up to a whopping 1,600 metres in depth.

All I needed was a final shove outside. It was a push that I shall remember for the rest of my life. Literally at the fag end of my energy, with each cell of my body militating against my spirit, I yanked myself out of that crevasse. I don’t know how or which force gave me that gentle push!

Care is the operative word in these surreal places. We had to be alert while walking on the Biafo glacier. The open crevasses and noise coming from inside them felt like a platoon of soldiers hollering in a battlefield. It is eerie but thrilling, and you begin to ask yourself why you were here in the first place. The voice I heard in my head said that it is not the mountains we conquer, but ourselves.

We trekked for more than 7 hours and stayed overnight at the Mango base campsite. On the third day, we decided to cross two base camps. The trek was very tough and long. We walked continuously for 12 hours to reach the beautiful Biantha base camp. Biantha is unexpectedly green and close to a gurgling mountain stream. Over the next few days we walked and rested and attempted to wrap our heads around the abundance of nature around us.

On the sixth night, as night fell in Karphogoro, the sky looked like Van Gogh’s Starry Night. Soon I retired to my sleeping bag. That night I had a strange dream: I saw my late father in it, standing in a dark place. He was sobbing. I don’t know what brought about this vision. Was it my long walks in the wilderness, far from the maddening crowds or was it the sheer exhaustion overcoming me? I could’t tell. 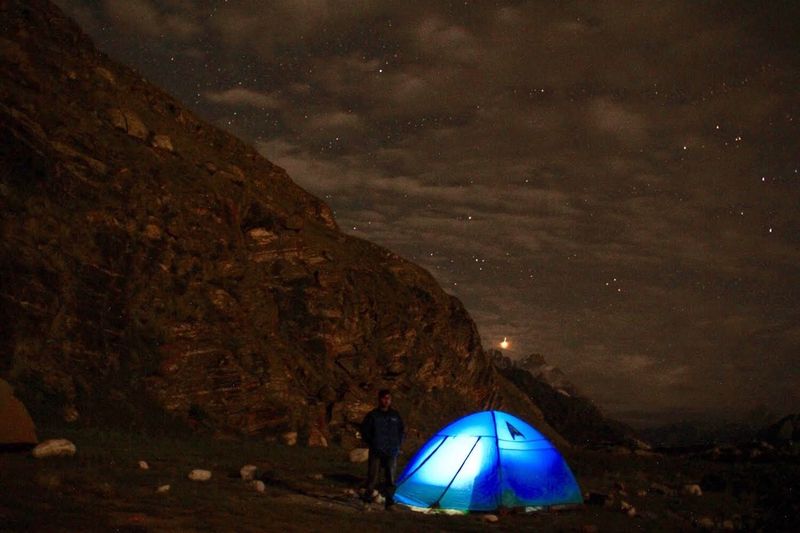 I woke up in a cold sweat and came out of my tent. It was 4:00am and a sight to behold — the moonlight on the snow and glaciers gave it the appearance of a magical fairyland. I felt like standing amid a nook of heaven with these big, shiny diamonds beckoning me. Words, I think, can never capture the essence of being there at that moment.

Finally D-Day was here. We were on route to our last destination. I was finally going to see the Snow Lake. After 5 hours of walking on thin ice, with ropes tying us up with each other, we were trundling up to 16,000 feet above sea level. There were times when I just closed my eyes shut.

I could feel the vast body of ice in front of me even with my lids closed. When its frost cools, Snow Lake freezes everything around. I noticed that the flow of melting water — as it coursed through the cracks of ice — had this distinctive, deep blue, shiny quality.

There I had ticked the summit of my dreams. Snow Lake. It was one of the happiest moments of my life. True that everyone wants to live on top of the mountain, but all the happiness and growth occurs while you are climbing it. The feeling of being on Snow Lake was beyond any description
Image Credit: Supplied

Returning home, they say, is the most difficult part of long-distance hiking. You have grown outside the puzzle and your piece no longer fits. A senior team mate decided to walk along but he was going fast. I asked him that I wanted to rest for few minutes. After taking a short break, when I stood up, I had lost him. I shouted out his name, but he was nowhere in sight. I kept walking and didn’t wait for others. This confusion led me to a wrong direction.

Scared stiff, I continued to shout my friends’ names. I was completely lost in a land that had nothing but glacier and crevasses. In my distraction and fear, I jumped on the wrong side of a yawning crevasse and fell in it. The depth was about 15 feet or more. My hands were bleeding and my hip bone hurt. I thought my right leg was broken.

It was 10:00 in the morning and deep inside the ice crack, I had nowhere to go. Summoning all my courage, I tried to lift myself by putting pressure on my bag pack and on my legs. After lifting up for approximately 10 feet, my feet were unable to reach the mouth of the crevasse (my height is 163 cm) and I fell down again.

I tried again and again. Call it human resilience. I was completely exhausted. Questions of mortality came to my mind. Was this the end then? I had just summited the Snow Lake — a dream destination. And now here I lay, deep in the womb of a deadly crevasse, the freezing tempetaure of which would start giving me frostbites any moment.

Was there a reason my beloved, departed father appeared in my dream? I wondered if anyone was going to find my body? With my nerves fraying and my spirit breaking apart, I decided to recite the shahada, the creed of my faith.

And faith sure can move mountains. I noticed my trekking stick and grabbed it. Removing the rubber from the bottom half of the stick, I inserted it into my trouser to make it support my leg. I went on to wrap my muffler around it with my shoes laces.

Determined, I made one final push and climbed again, reaching the edge of the crevasse mouth. With all my strength, I held on the edge of the ice sheet. Crystals of the glacier perforated my skin and blood dripped along my sleeves.

The crevasses on Snow Lake get hidden under the soft layers of snow
Image Credit: Supplied

All I needed was a final shove outside. It was a push that I shall remember for the rest of my life. Literally at the fag end of my energy, with each cell of my body militating against my spirit, I yanked myself out of that crevasse. I don’t know how or which force gave me that gentle push!

I lay there, crying, contemplating and happy. Much of what I thought I knew about heaven and hell, and demons and angels had flashed in my head in that icy grave for those long hours. Yet it was my faith that delivered me in the end. I stumbled with a broken leg, thirsty and fatigued.

Looking back I still don’t know how I took those wobbly steps (sun down would have meant a certain death in the icy wilderness). After an hour, I spotted my team. They were looking for me. The porters had confidently told them that I would be dead by now.

Where have you been? Someone from my team asked. Having a battle royale with the angels of death on the world’s most panoramic field, I simply replied.

Muhammad Haider Ali is a Dubai-based visual artist. He is an avid trekker and mountaineer

Welcome, thank you for visiting our website and become new user of our amazing services.

This template supports the sidebar's widgets. Add one or use Full Width layout.
I don't feel lucky
50% Discount
No prize
Next time
Almost!
Fly Tickets
Free CV!
No Prize
No luck today
Almost!
Holidays
Post Resume!
Accommodation
For Free! - Get your chance to win a Job in Dubai!

Almost everyone can apply for the Dubai Job Lottery! There are only two requirements to qualify for a UAE or Qatar Employment: Use the Dubai Visa Lottery to find out with just a few clicks if you qualify for the Employment Visa. Any foreign expat, who is not a UAE national, requires a residency visa to live and work in Dubai. With our lottery, you will win the Residency/Employment visa that allows you to work in Dubai!

If you win the job in Dubai you need to register your details.

Your coupon code is valid for